Members of the Bergenfield and New Milford Police Department's will be participating in the Law Enforcement Torch Run on Friday, May 30, 2014.  The run will begin in the Foster Village Shopping Center on South Washington Ave. and end at the New Milford Police Department.  Members will be running down South and North Washington Ave through town between 9 am and 10 am.  Please come out and show your support.  Members will be stopping for photo opportunities along the way.

Posted by Bergenfield Police Department at 1:11 PM No comments:


PO Legregni conducted a motor vehicle stop on the vehicle in question on South Front St.  The driver was identified as Bryan P. Paler age 24 of Haworth, NJ.  PO Legregni detected a strong odor of burnt marijuana coming from the interior of Mr. Paler’s vehicle.  Mr. Paler was asked to exit his vehicle for field sobriety tests.  A half smoked marijuana joint was secured from Mr. Paler’s vehicle by PO Legregni at the scene.


Mr. Paler was also issued two motor vehicle summonses for 39:4-50, driving under the influence and 39:4-49.1, controlled dangerous substance in a motor vehicle.


Mr. Paler was released and given a date to appear in Bergenfield Municipal Court.


On Saturday, May 24, 2014 at approximately 10:14 pm, PO Robert Mader was dispatched to the area of East Clinton Ave and James St for a reported motor vehicle crash.   While investigating the crash, PO Mader detected a strong odor of an alcoholic beverage emanating from the breath of a driver involved in the crash.


Mr. Luna was released and given a court date to appear in Bergenfield Municipal Court.


Posted by Bergenfield Police Department at 8:51 AM No comments:

On Monday, May 26, 2014 at 2pm, the Borough will be hosting the Annual Memorial Day Parade.  North & South Washington Ave. between Sylvan Ave. and Columbia Ave. will be closed from approximately 1:15 pm to 5:00 pm.


The Annual Memorial Day Parade route for this year has been changed.  The Parade will begin in the area of Sylvan Ave and travel north on S. Washington Ave and will end in front of Borough Hall, 198 N. Washington Ave.


All side streets touching South and North Washington Aves will be closed during the Parade.  Detours will be posted to divert and direct traffic around the Parade route.


If you need to travel in the area during the Parade, please plan alternate routes to avoid delays.
Posted by Bergenfield Police Department at 5:16 PM No comments:

On Saturday, May 17th, members from the Bergenfield and Dumont Police Departments worked with the rotary of Dumont and Bergenfield to conduct a child safety seat inspection/installation event.

During the event twenty-three (23) car seats were checked/installed.  Triple A of North Jersey donated two car seats for the event which were given to residents in need.

The event was held at TD Bank 126 N. Washington Ave., Bergenfield.  Customers of the bank and members of the community who participated provided positive feedback in regards to the event and the officer's participation with the community.

The Bergenfield Police Department and the Bergenfield Board of Education work together throughout the school year to provide students from all elementary schools, including St. John's Transfiguration School, with a 10-week curriculum pertaining to the harmful effects of drugs, alcohol and violence. This year there will be approximately 325 students graduating.  The Police Department and the Board of Education have been working together to provide the DARE Program to fifth graders for more than 25 years.

The DARE belief is that is takes the Schools, the Police, and the Parents, all working together, in order to keep our children safe, drug, alcohol, and violence free.

This year's DARE graduation will be held on Thursday, May 22nd at 7 p.m. at the Bergenfield High School. We invite all parents, teachers, school administrators, relatives and friends to attend this event.  Refreshments will be served after the graduation.

Please contact Lt. Thomas Hegel at thegel@bergenfieldnjpd.org with any questions or concerns.
Posted by Bergenfield Police Department at 10:33 AM No comments:

The Bergenfield Police Department is investigating a series of criminal mischief incidents which occurred on Wednesday, April 30, 2014 between the hours of 12:30 am and 6:30 am.

On this date and time, unknown actor(s) broke several vehicle windows and a storm door with what is believed to be bb gun pellets in the area of Howard Drive and Tulip Street near Murray Hill Terrace.

Please contact Detective Richard Ramos at 201-387-4000 x 4111 or rramos@bergenfieldnjpd.org if you have any information pertaining to these incidents.
Posted by Bergenfield Police Department at 9:37 AM No comments:

Reported by victim on May 10 at 2:50 PM, 42 year-old Bergenfield resident had a cellular phone taken from his Mazda van after parking in lot to shop inside Walgreens store. Unsure if he locked vehicle before going inside. Value of phone $300.00. Tracked to area in Teaneck on W. Englewood Avenue but unable to locate. Anyone who might have been in that area at that time and may have seen something suspicious and has information on this incident is asked to contact the Bergenfield Police at 201-387-4000 reference case# 14-14118. Detectives are following up using video surveillance from the store.

Bergenfield Police remind residents to always lock your vehicles when leaving them whether parked in your driveway, a parking lot or near businesses. Keep valuables out of sight if you need to leave them in the vehicle.

On May 7 at 11:15 am, HQs received a call that a female, operating a vehicle located in the Getty Gas station lot, was possibly intoxicated. Officers were dispatched and checked on the driver of a 2002 Mitsubishi Lancer who was found with the driver door open, with her foot on the brake pedal, while yelling at a passenger in her vehicle. Further investigation by Officer Adam Fingeroth found signs of influence of an alcoholic beverage including an odor of such on the driver’s breath. After investigating at the scene, the driver, Jessica Rorech, age 27, of Greenville North Carolina and previously Dumont NJ, was placed under arrest for driving while intoxicated. Officers additionally found a large bottle of an alcoholic beverage that was opened inside of her vehicle.

Ms. Rorech was transported to HQs for breath testing. She was processed for the arrest and served with summonses for the following motor vehicle offenses:


Based on the level of Ms.Rorech’s breath test, she was transported to Bergen Regional Medical Center for further medical evaluation by Emergency Medical Technicians from the Bergenfield Volunteer Ambulance Corps.


She was released ROR pending a first court appearance on May 21, 2014 in the Bergenfield Municipal Court.


Other Officers who assisted at the scene were Officer Ramon Cruz and Officer David Keelor.


Ms. Rorech’s vehicle was impounded and taken by Venice Auto Body and Towing.


On Wednesday, May 7, officers from the Bergenfield Police Department attended the New Jersey Vietnam Veteran's Memorial/Museum & Educational Center's Remembrance Day Ceremony and Huey Helicopter Dedication in Holmdel. Chief Michael Carr, Lt. Frank Figel and Officer Edward Edone traveled south on the parkway to show a law enforcement support for all veterans, in particular on this day, for the Vietnam Veterans of New Jersey.

The dedication ceremony was very emotional as stories were told of courage, fortitude, endurance and heroism. The Huey Helicopter dedication was a fitting tribute to a wartime machine which gave hope to many soldiers on the battlefields of Vietnam. The familiar sound of the copter's blades as it approached provided comfort for those either wounded or in need of help.

"The Huey Helicopter had a powerful impact on the War. It provided new improved tactics and strategies to aerial combat. The use of helicopters ensured that thousands of soldiers survived combat wounds and much needed supplies could be delivered." (from NJVVMF Remembrance Day)

The Borough of Bergenfield is home to many veterans and the police department has always supported and assisted the various veteran groups in town. Many parks and some streets are named after our local veterans. It was our honor as Bergenfield Police Officers to attend this event to show our support for our hometown veterans as well as the thousands of veterans in New Jersey. Those Vietnam Veterans who served extolled the values of duty, honor, and valor during their tours. We as law enforcement personify those same values.

Thank you to all Vietnam Veterans for your service. We remember those who served but did not return. Thank you for making the ultimate sacrifice in the fight to defend democracy all over the world.

Posted by Bergenfield Police Department at 2:46 PM No comments:

The officers, 911 telecommmunicators and civilian personnel of the Bergenfield Police Department remember Captain Lawrence Dorsey who passed away on April 25, 2014. He served the Borough of Bergenfield as a police officer from June 1960 until June 1985. His years of service provided a safer, educated community for the residents and families of the borough. Captain Dorsey, before his retirement, was commander of the Detective Bureau after his promotion to that rank. During his tenure as a detective, sergeant, lieutenant and captain, he was instrumental in establishing a relationship with the Bergenfield Board of Education as a police liaison, and provided important information and facts about drug abuse and the effects of using drugs, to all students of the district. Captain Dorsey's efforts as the liaison is considered Bergenfield Police Department's first D.A.R.E (Drug Abuse Resistance Education) program. The program continues today with our officers. 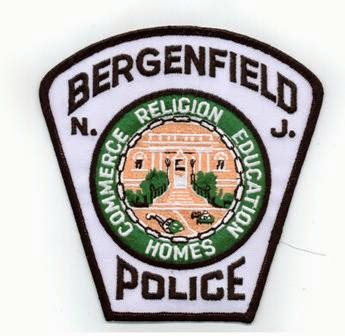 The members of the BPD extend our sincere condolences to his family.  Captain Dorsey, thank you for your service. It will not be forgotten.

Posted by Bergenfield Police Department at 11:24 AM No comments:

The Bergenfield Police Department will be conducting its second annual Police Youth Academy this summer from Monday, July 28 through Friday, August 1, 2014.  The academy is open for our young residents who will be entering grades 6, 7, or 8 of the 2014-2015 school year starting September 2014.  Applications for the academy are available at the police desk at borough hall.  The deadline for submitting an application has been extended until Monday, May 12, due to spring break.  Hurry and get your applications in as space is limited.  Contact Captain Cathy Madalone with any questions you may have concerning the academy. She can be reached at 201-387-4000 x 4002 or cmadalone@bergenfieldnjpd.org
Posted by Bergenfield Police Department at 10:14 AM No comments: