On Saturday, April 30th, 2016, from 10am-2pm, Bergenfield PD in conjunction with the Drug Enforcement Administration (DEA) will be participating in “Operation Take Back New Jersey”.  There will be drug disposal boxes present in HQ for the collection of expired, unwanted, new/used medications.

Individuals may dispose of medication either in its original container or by removing medication from its container and disposing directly into the drug disposal box. If the original container is submitted, the individual is encouraged to remove the prescription label if it contains any personal identifying information. Liquid products, such as cough medicine, should remain sealed in their original container. The depositor should ensure that the cap is tightly sealed to prevent leakage. Syringes and other sharp instruments will not be accepted.

Law enforcement officers will by standing by the drug disposal box at all times. However, they will not handle the medications at any time. The depositor will be able to deposit medication freely and independently.
Posted by Bergenfield Police Department at 12:25 PM No comments: 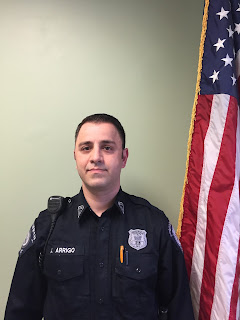 
Joseph began his law enforcement career in 2005, for the Morris County Sheriff’s Office as a Sheriff’s Officer.  Joseph was in the Protective Services Division and the Community Services Division where he participated in Project Lifesaver.  Joseph was hired in 2012 by the Bergenfield Police Department as a transfer through the Intergovernmental Transfer Program.  Joseph is involved in many community orientated programs such as the Youth Police Academy and D.A.R.E.
When not at work, Joseph likes to read and play basketball.  Joseph also likes to spend time with his friends and family.  Joseph looks forward to continuing to provide guidance to the youth of Bergenfield.

Posted by Bergenfield Police Department at 9:34 AM No comments:

On 4/13/2016, at 01:28 am, Sgt. Duran and PO Tauber conducted a motor vehicle stop in the area of West Main St / Front St., which led to the arrest of the driver, Esteban Perez, age 22, of Bergenfield, NJ. Mr. Perez was originally stopped for driving while using his cellphone. While questioning him, the officers smelled raw marijuana emanating from the vehicle. Mr. Perez exited his vehicle and was searched. A glass pipe was located in his pocket. A search of the vehicle was also conducted and a large glass jar, containing suspected marijuana was located underneath the driver’s seat.
As Mr. Perez was being handcuffed, he began to resist the arrest at which time necessary force was used by the officers to effect the arrest. Mr. Perez was charged with the following complaint summonses:


Mr. Perez was also issued the following motor vehicle summonses: Use of a cell phone while driving and Possession of CDS in a vehicle. He was released and given a court date of 4/20/2016
Posted by Bergenfield Police Department at 7:06 AM No comments:

Bergenfield PD’s Sector Supervisors will hold its first meeting for the NW Sector. The meeting will be held in the Borough Hall Court on April 14, 2016, from 7-9 pm. The meeting will be attended by Lt. Hegel and Lt. Maggi. We urge all residents in their respective sectors to attend and participate. Any issues, concerns, or comments are welcomed. We look forward to engaging with the community in hopes of extending our already great relationship.

Future sector meetings will be posted shortly. Thank you all in advance.
Posted by Bergenfield Police Department at 6:26 PM No comments: 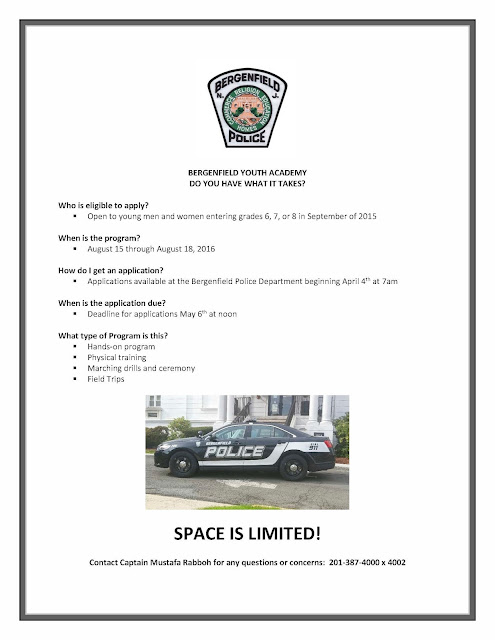 Posted by Bergenfield Police Department at 3:04 PM No comments:

On 3/25/2016, at approximately 9:25 am, an employee of ACME reported a female attempting to purchase gift cards using a fraudulent credit card. Upon the employee asking the female to see the credit card, the female became verbally confrontational and left the store. The female then entered a vehicle and fled the scene. The vehicle was described as an older model, four door, Toyota sedan bearing NY registration.

Officers Morano and Cruz who were assisting with traffic on a construction assignment on Woodbine St. observed the vehicle in question traveling north bound on Woodbine St. and ordered it to stop. Additional Bergenfield Officers responded to the scene. Investigation and a consent to search of the vehicle at the scene resulted in the arrest of the three occupants and the confiscation of a stun gun, twenty seven (27) fraudulent credit cards listed in numerous names, six (6) Master Card gift cards valued at $50.00 each, with an additional seventeen (17) Master Card gift cards, unknown denomination at this time, and four (4) US Postal money orders from different jurisdictions with various denominations valued at $900.00.

The three individuals arrested are:

Bergenfield Municipal Court Judge Herbert was contacted and issued the warrants for all three arrestees. Bail was set at $125,000 per arrestee with option of 10% allowed. All three were unable to post bail and were transported to the Bergen County Jail.
Posted by Bergenfield Police Department at 9:36 AM No comments: