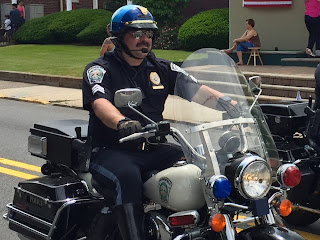 Dan is the youngest of 11 children, and was born and raised in .  He attended and is a graduate of the class of 1985.  He attended William Paterson University for 2 years, before enrolling at the Computer Processing Institute.  He completed a 6 month course of study and received certification as a Computer Programmer. Over the course of the next 14 years, he went on to be employed by several fortunate 500 companies, moving up the ladder, and eventually becoming a Senior Systems Analyst with Prudential Financial.  Shortly after 9/11, he felt compelled to make a difference, and so he decided to change careers and pursue law enforcement.

Initially, he took a job with Homeland Security as a TSA Security Screener at Newark airport from 2002 to 2003.  During this time, he took the Law Enforcement Exam.

He was hired by the Human Services Police Department in June of 2003 and was assigned to the Greystone Psychiatric Facility in Parsippany-Troy Hills, NJ.  He attended the Morris County Police Academy, where he was President of his academy class.  Shortly thereafter, he received a call from, the Bergenfield Police Department and interviewed for a position.  In February of 2004, he left Human Services and was hired by Bergenfield where he was assigned to the Patrol Division.

In August of 2011, Dan was reassigned from the Patrol Division to the Traffic Bureau.  While in Traffic, he represented the department as a member of the Police Traffic Officer’s Association of Bergen County and sat on the board of the Barrier Free Committee.

When not at work, Dan enjoys spending time with his wife Pamela and his two daughters Alexandra and Isabella.

Posted by Bergenfield Police Department at 11:24 AM No comments:

On 6/15/2016, at 3:50 pm, Officers Ramon Cruz and Peter Morano were traveling in a marked police vehicle in the area of S. Front St., and observed an individual known to them as Joseph Marsilio, riding his bicycle. Officers approached Joseph Marsilio and began speaking to him, Joseph Marsilio was extremely nervous during the encounter. While continuing their conversation, Joseph Marsilio kept placing his hands in his pants pockets. After several times of being advised to remove his hands from his pockets, Joseph Marsilio then confessed and reached into his front pants pocket and provided the officers with a napkin which contained 7 clear plastic baggies with suspected crack cocaine.

Bergenfield Municipal Court Judge Herbert was contacted and issued the warrants with bail set at $75,000 with no 10% option allowed. Joseph Marsilio was transported to Bergen County Jail in lieu of bail.
Posted by Bergenfield Police Department at 8:22 AM No comments:

On 6/14/2016, at approximately 08:53 am, Officers responded to 115 Highview Ave (Lincoln Elementary School) on a report of a lockdown. Upon arrival, officers met with the school employee. It was reported that a Hispanic male in his 50’s with salt and pepper hair, wearing a black pants and a black shirt approached a teacher in the parking lot and stated that he wanted to “blow up the school”. The male then left the area on foot. As a precaution, all Bergenfield Schools were placed on lockdown.  Officer Daynel Ozorio located the male on New Bridge Rd / Greenbriar St. Upon further investigation, the male was arrested and identified as Edgar Perez, age 48, of Bergenfield, NJ.

Officers searched the area of the school and did not observe anything suspicious. Officers also responded to Mr. Perez’s residence and were given permission by Mr. Perez’s mother to conduct an interior search of the home. The search yielded negative results.

The Bergenfield Police Dept. in conjunction with the Bergen County Prosecutor’s Office handled the case. Edgar Perez was charged with the following:  2C:33-2a(1), disorderly conduct and 2C:12-3A, Terroristic threats. Bergenfield Municipal Court Judge Herbert was contacted and bail was set at $20,000 with no 10% option. In lieu of bail, Edgar Perez will be transported to Bergen County Jail.
Posted by Bergenfield Police Department at 4:56 PM No comments:

The funeral arrangements for retired Lt. Brian Monaghan are as follows:

All are welcomed to come and pay their respects.
Posted by Bergenfield Police Department at 3:25 PM No comments:

On 6/7/2016, at approximately 5:08 pm, plain clothes officers Ramon Cruz and Peter Morano were conducting surveillance in the area of Murray Hill TC / Sylvan Ave when they observed a male pacing back and forth on Sylvan Ave., attempting to flag down cars as they drove by. Officers, with the assistance of Detective David Tortora, approached the male on foot at which time, he threw a clear medium sized plastic bag in the driveway of a home. Officer Cruz immediately retrieved the bag, which contained 15 individually packaged in aluminum foil, a white powdery substance, suspected crack / cocaine.

Bail was set by Bergenfield Municipal Court Judge Herbert in the amount of $100,000. With no 10 % option on two warrants and $45,000 with 10 % option on three additional warrants. Total bail of $145,000. Kenneth Harding was unable to post bail and transported to Bergen County Jail.
Posted by Bergenfield Police Department at 3:34 PM No comments: