PSE&G has scheduled work to be conducted for the week of September 15, 2014.  The work will be conducted Monday through Saturday, weather permitting.  Please see the notification below for further details and road closures. 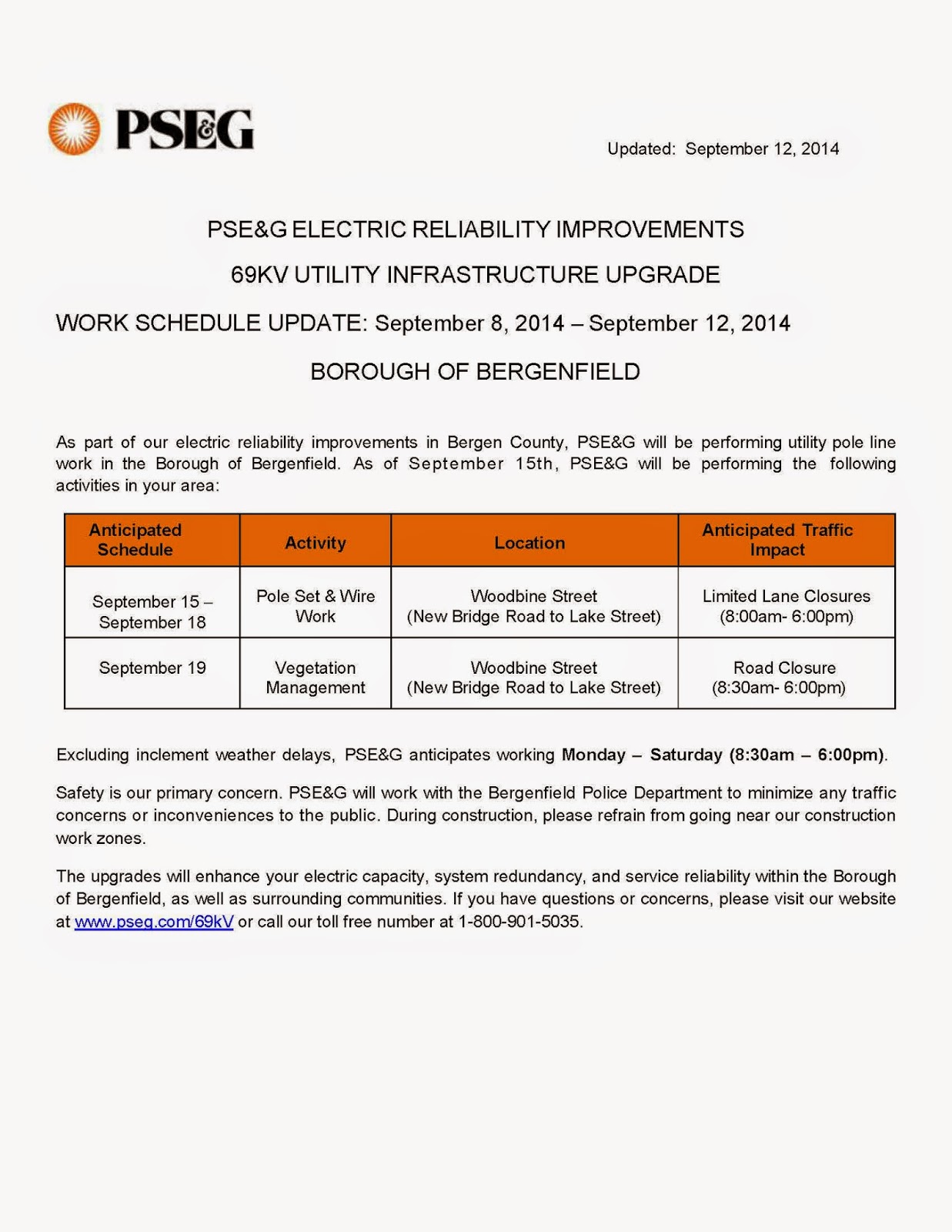 Posted by Bergenfield Police Department at 6:22 PM No comments:

http://www.deadiversion.usdoj.gov/drug_disposal/takeback/index.html
Posted by Bergenfield Police Department at 9:30 AM No comments:

On Saturday September 13, at approximately 8:56 AM, officers responded to the rear of 20 W. Church Street on the report of a disoriented male in need of medical attention. Officers found John Humbert with partially healed wounds consistent with having been inflicted with a cutting instrument. Further investigation found he admitted to inflicting such wounds upon himself. Mr. Humbert was transported to Bergen Regional Medical Center in Paramus after officers consulted with the Psychiatric Emergency Screening Program (PESP) counselor. Continued investigation at Mr. Humbert’s apartment, located on W. Church Street, found his wife, Joyce Humbert age 62, with similar wounds and in need of immediate medical attention. Mrs. Humbert also displayed signs of mental instability as well as verbalizing suicidal thoughts.  She was transported by Emergency Medical Technicians (EMTs) from the Bergenfield Volunteer Ambulance Corps and paramedics from Holy Name Medical Center to Holy Name Emergency Room.

The investigation continued and a search warrant was obtained for the Humbert apartment. Bergenfield detectives, along with detectives from the Bergen County Sheriff’s Department, executed the warrant and checked the location for further evidence. After interviews, consult with the Bergen County Prosecutor’s Office and the search warrant, John Humbert was charged with aggravated assault, possession of a weapon (razor), aiding suicide and the attempted murder of his wife. Bail was set by Bergen County Superior Court Judge Edward Jerejian at $500,000 no 10%. Mr. Humbert was remanded to the custody of the Bergen County Sheriff at the Bergen Regional Medical Center in lieu of bail and further evaluation by mental health staff. Joyce Humbert is recovering from wounds she received and is expected to survive. She too will be evaluated further by mental health professionals before any release from the hospital.
Posted by Bergenfield Police Department at 9:11 PM No comments:

On September 27, 2014, from 10 am to 2 pm, the Bergenfield Police Department and the Drug Enforcement Administration (DEA) will give the public its eighth opportunity in three years to prevent pill abuse and theft by ridding their homes of potentially dangerous expired, unused and unwanted prescription drugs. Bring your medications for disposal to the Bergenfield Police Department at 198 N. Washington Avenue. The service is free and anonymous, no questions asked.

Click on the link below for the National Drug Take back press release and results of the program for the last seven years.  http://www.justice.gov/dea/divisions/hq/2014/hq050814.shtml


This initiative addresses a vital public safety and public health issue. Medicines that languish in home cabinets are highly susceptible to diversion, misuse, and abuse. Rates of prescription drug abuse in the U.S. are alarmingly high, as are the number of accidental poisonings and overdoses due to these drugs. Studies show that a majority of abused prescription drugs are obtained from family and friends, including from the home medicine cabinet. In addition, Americans are now advised that their usual methods for disposing of unused medicines— flushing them down the toilet or throwing them in the trash — both pose potential safety and health hazards.

DEA is in the process of approving new regulations that implement the Safe and Responsible Drug Disposal Act of 2010, which amends the Controlled Substances Act to allow an “ultimate user” (that is, a patient or their family member or pet owner) of controlled substance medications to dispose of them by delivering them to entities authorized by the Attorney General to accept them.  The Act also allows the Attorney General to authorize long term care facilities to dispose of their residents’ controlled substances in certain instances.

Posted by Bergenfield Police Department at 9:00 AM No comments:

PBA Local 309 and the Dumont/Bergenfield Rotary to Host Run

The Bergenfield PBA Local 309 along with the Dumont/Bergenfield Rotary will be hosting a 5K race and a 1 mile costume fun run/walk on Sunday, October 26, 2014.  Please see the below flyer for information on both races and registration.  If you have any additional questions please contact Detective Kyle Witty at 201-387-4000 x 4011.﻿ 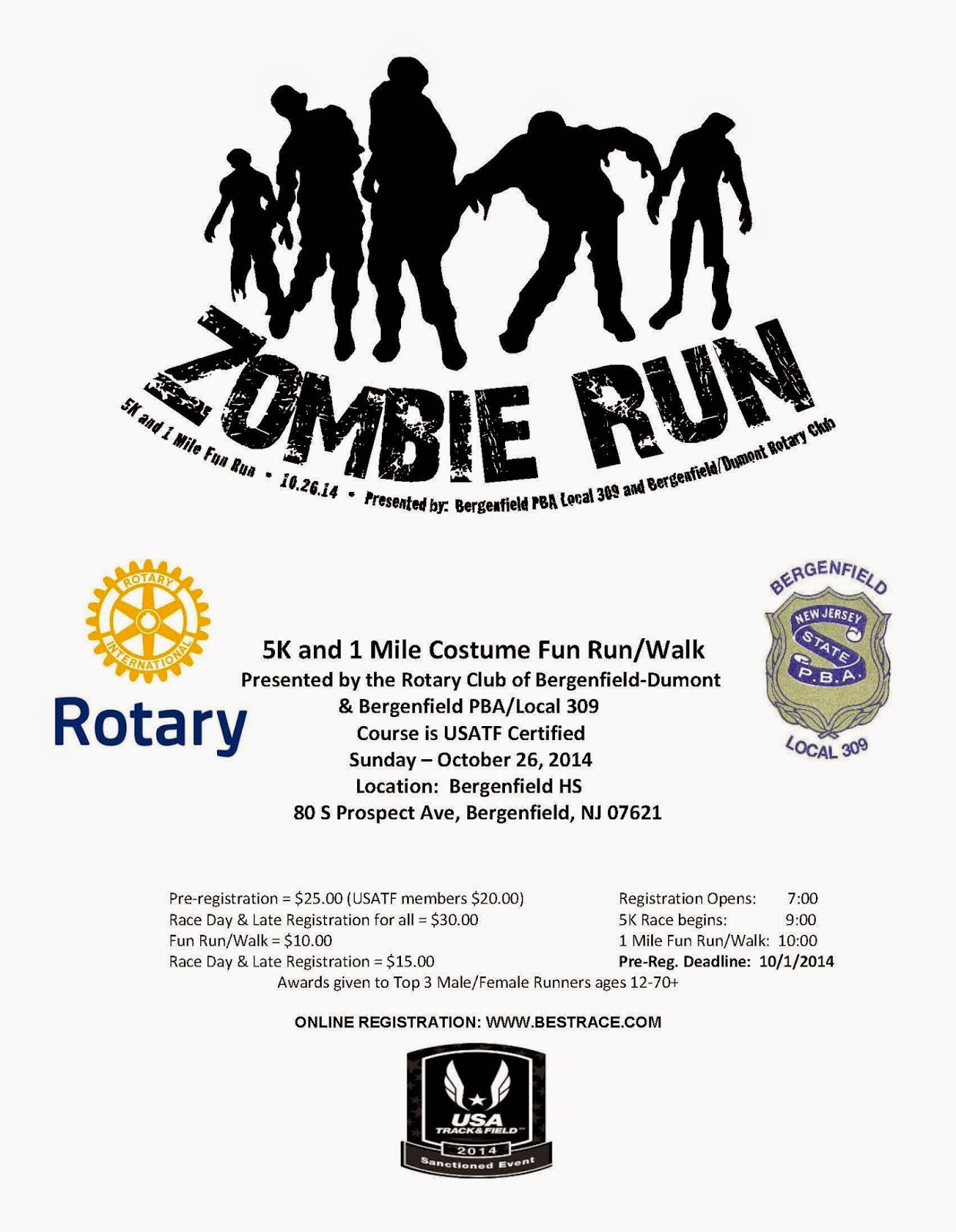 Posted by Bergenfield Police Department at 11:10 AM No comments:


On Saturday, September 6, at 3:01 AM, Bergenfield Police received a 911 call reporting a house fire at 67 Arlington Avenue. The first arriving police patrols reported a heavy smoke condition coming from the residence. Fire units arrived quickly and began their attack on the fire which was reported to be a “working” fire by Fire Chief Jason Lanzilotti.
The cause of the fire was determined to be food burning on a stove which extended to the cabinets and walls behind the stove located on the first floor of the single-family residence. First-in firefighters quickly extinguished the main fire and additional firefighter personnel handled the fire that extended into the walls between the basement and the second floor. Fire personnel also rescued a family dog from the basement area.
There were no reported injuries to the residents or fire personnel. Heavy smoke, as well as utility shut off, caused the displacement of the residents for the remaining early morning. The fire is not deemed suspicious at this time.
The Bergenfield Fire Department was assisted at the scene by the New Milford Fire Department FAST (Firefighter Assist and Search Team), as well as the Bergenfield Volunteer Ambulance Corps. The fire operations were completed in a time of approximately ninety (90) minutes.

Posted by Bergenfield Police Department at 11:31 AM No comments:

On Friday, August 29th at approximately 7:45 pm the victim, a 39 year old female, was walking home on New Bridge Rd after getting dropped off by the bus.  The victim was walking west on the south side of New Bridge Rd across from Memorial Park.


The victim observed a small sedan, light in color, possibly a Toyota or Honda, which was traveling west on New Bridge Rd, drive past her and pull over.  Two males exited the vehicle.  One of the males crossed the street to the victim’s side of the road and was walking directly towards her.  She was suspicious of the male as he walked past her.  At that time, he turned around and assaulted her by striking the victim in the back of the head causing her to lose her balance and fall into the roadway.  The actor then fled east on New Bridge Rd.  The victim noticed a second male that exited the vehicle standing on the north side of New Bridge Rd who also fled into Memorial Park after the assault.


Actor #1 is described as a Hispanic male, 18-22 years old, approximate height 5’10”, approximate weight 180 pounds, wearing a red t-shirt, khaki shorts, white and black sneakers.  A composite sketch was created from the victim’s description by Detective Kevin Doheny.
Actor #2 is described as a light skinned Hispanic male, thin build, approximately 18-24 yrs old, wearing a green jersey, #9 on back and having a pony tail.  (this male was across the street)
Actor #3 is described as a light skinned male, possibly Hispanic, wearing dark clothing.  This male was the driver of the vehicle.  This male fled in the vehicle traveling westbound on New Bridge Rd after the assault. 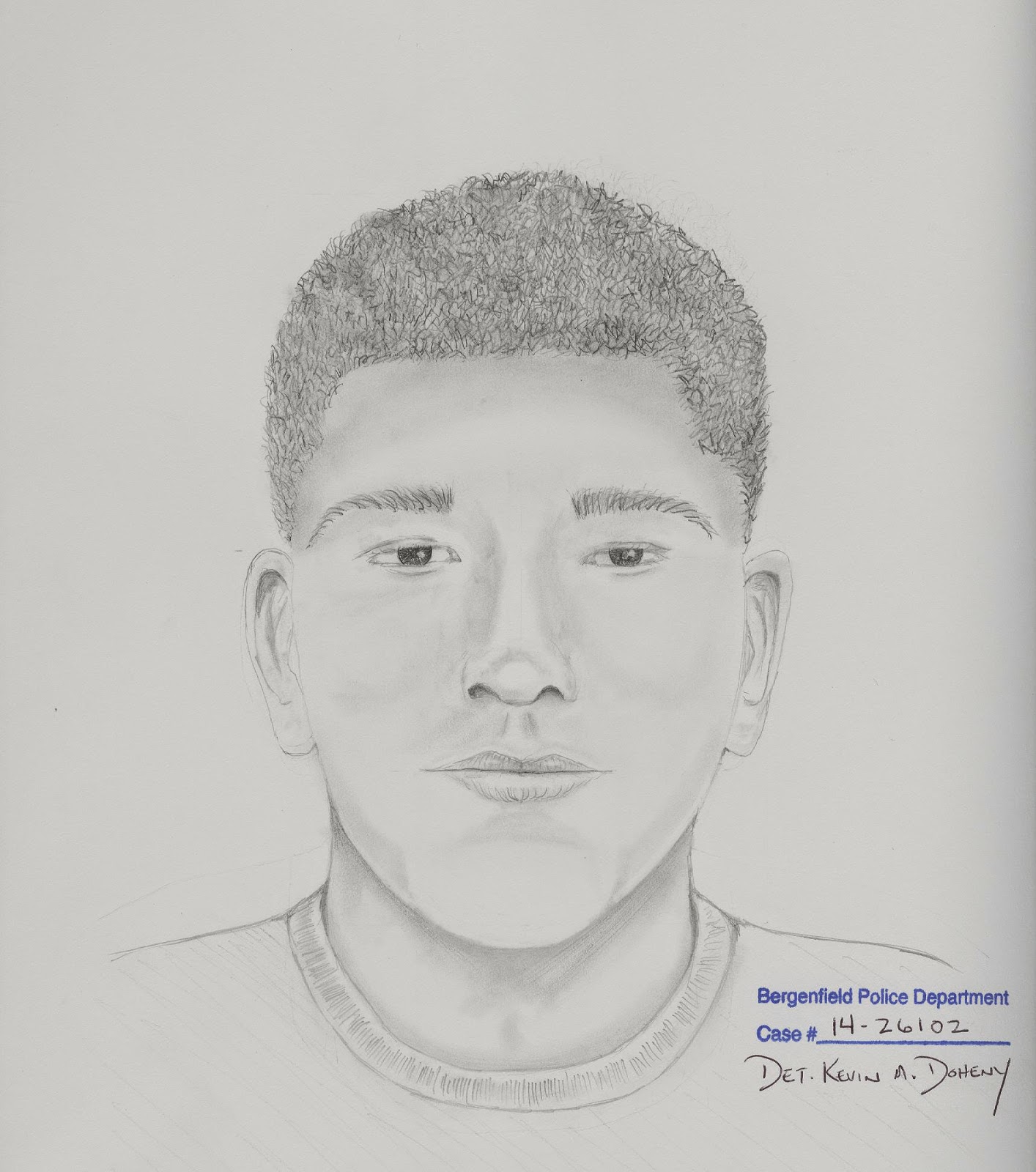 Posted by Bergenfield Police Department at 3:12 PM No comments: