Click below for link to article on web
Youth Police Academy
Posted by Bergenfield Police Department at 1:26 PM No comments:


On Saturday, July 26, 2014 at 8am, United Water will begin a construction project replacing water mains in the areas of Prospect Ave, West Church St, Franklin Ave and West Main St.  Construction will begin each morning at 8am and end approximately 5pm, weather permitting.  The project is expected to last approximately two weeks.  During the construction project, roadways will be closed and detours will be posted.  Officers will be on site daily to assist with traffic flow and ensure the work area is safe.

Please follow us on twitter@bergenfieldnjpd for updates.  In addition, this department also utilizes other social media platforms which will provide updates.  These platforms are Nixle.com, facebook.com/bergenfieldpd and our department website at www.bergenfieldpd.org.

See the letter below from United Water sent to customers in the affected area. 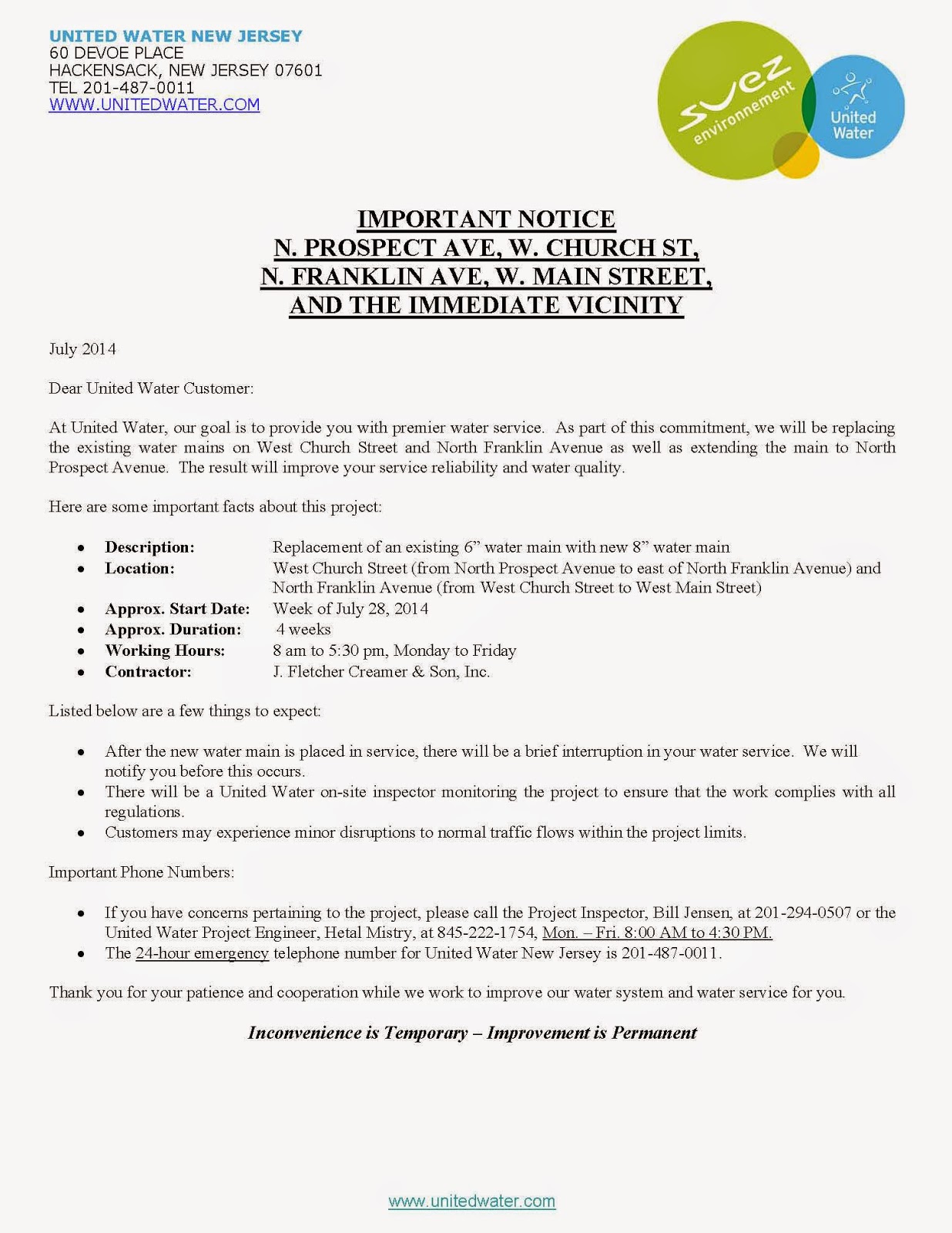 Posted by Bergenfield Police Department at 1:34 PM No comments:


On Tuesday, July 15, 2014 at 2:34 pm, Officer John Brown was assigned to conduct an investigation at police headquarters regarding a matter that was reported by a complainant who had walked into headquarters. Upon arrival, Officer Brown spoke with the complainant, Ramon Diaz, age 35 of Teaneck, NJ.  During the investigation of Diaz’ complaint, a warrant against him was confirmed as active for Violation Litigants Rights: non-payment child support, authority Bergen County Superior Court-Chancery Division-Family Part.  The warrant was issued on May 27, 2014 by Superior Court Judge Bonnie J. Mizdol with no bail. Diaz was placed under arrest and processed by Officer Brown.


The Bergen County Sheriff’s department arrived at police headquarters at 4:45 pm and took custody of Diaz.
Posted by Bergenfield Police Department at 7:05 AM No comments:

On Sunday, June 29, 2014 at 3:36 am Bergenfield Police Officers were dispatched to the intersection of South Prospect Avenue and Reid Avenue on the report of a single motor vehicle crash into a utility pole.


Upon arrival, Officer Ahmed Alagha observed a utility pole with severe damage and a black Dodge pickup crashed into a nearby tree.  Officer Alagha spoke with a male who identified himself as the driver of the pick-up truck. The driver did not report any injuries at that time. Further investigation  by the officer found an odor of alcoholic beverage emanating from the driver along with other signs of him possibly being under the influence of an intoxicating liquor or drug.  The driver was identified as Allan J. Martin Jr., age 23, of Bergenfield.

Officer Alagha had Martin perform field sobriety tests at the scene and after testing, he was arrested for suspected DWI. Martin was transported to police headquarters for processing and breath testing.  While at headquarters, a minor injury was observed and emergency medical services responded. After being evaluated by medical technicians from the Bergenfield Volunteer Ambulance Corps, he refused medical aid or transport to a hospital. Processing continued and Martin provided breath samples.  After completing all testing and processing, Martin was issued motor vehicle summonses for DWI and Reckless Driving. He was released to a family member at 05:06 AM and advised to appear in Bergenfield Municipal Court on July 16, 2014 at 4:00 PM.


PSE&G was notified of the damage to the utility pole and responded to the scene for repairs.

Posted by Bergenfield Police Department at 7:52 AM No comments: